London [U.K]July 15 (ANI): Bollywood actor Hrithik Roshan on Thursday enjoyed some jazz music with the new love of his life Saba Azad in London.
Taking to Instagram, Saba dropped some glimpses of her fun night out with the ‘Krrish’ actor, to which she captioned, “Where are the jazz cats??” followed by some chat emoticons.

The first photo is a selfie, in which the couple can be seen holding their glasses in their hands, while Saba can be seen with a smiling face, the ‘Kites’ actor meanwhile shared a winking pose eye, wearing his girlfriend’s glasses.
In another post, the lovebirds can be seen enjoying jazz music at a club.

In the third photo, the two actors could be seen posing outside the Ronnie Scotts Jazz Club with their arms around their shoulders. 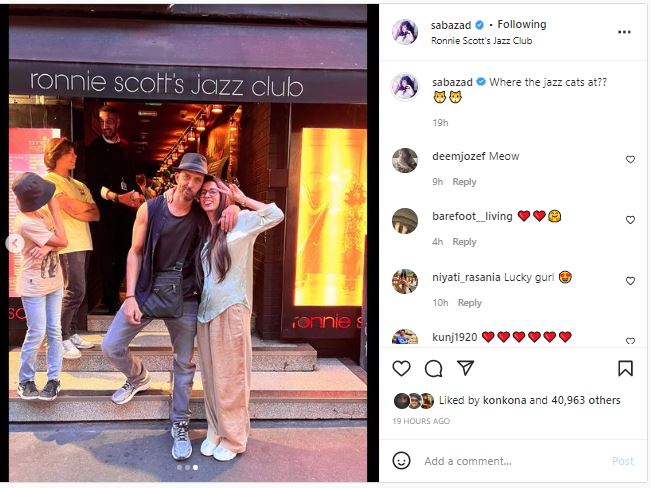 The rumors about Hrithik and Saba started when they were spotted at a dinner date together in February. Later, Saba also joined Hrithik’s family for a reunion. However, Hrithik and Saba have been making headlines since their first appearance together at producer Karan Johar’s 50th birthday party.
Saba is a multi-talented actor and singer. She has been a part of many notable Bollywood movies like “Detective Byomkesh Bakshyi”, “Shaandaar” and “Karwaan”. Meanwhile, on the movie front, the ‘Super 30’ actor is currently awaiting the release of ‘Vikram Vedha’ which also stars Saif Ali Khan and Radhika Apte. Its release is scheduled for September 30.
Apart from that, he will also be seen sharing screen space with Deepika Padukone for the first time in Siddharth Anand’s ‘Fighter’ with the highly anticipated ‘Krrish 4’. (ANI)